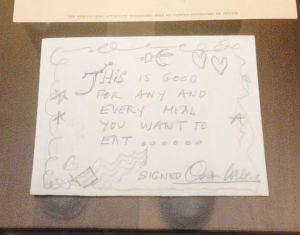 Welles said it on the radio every week for years: “Who knows what evil lurks in the hearts of men?” Calling this evil, exactly, doesn’t seem right, and I’m pretty sure there’s no hearts involved here, but something definitely lurks in whatever organ it is that Lou Lumeneck draws from to create his articles for the New York Post. For reasons that he has thus far failed to share with his readers, Lumeneck has discovered that he has some manner of axe to grind against Welles, and has written three rather nasty articles about him in the last six months. That doesn’t sound like a lot in the grand scheme of things, but given that he’s reserving his vitriol for a filmmaker who’s been dead and inactive for 30 years, it’s worth at least a raised eyebrow.

He began last December with his review of Chuck Workman’s (very fine) Magician: The Astonishing Life and Work of Orson Welles, entitled “How Orson Welles’ narcissism sabotaged his career [sic].” Cited examples of this narcissism include “his choice of a story about a romantically obsessed press tycoon” for Citizen Kane, dyeing Rita Hayworth’s hair blonde for Lady from Shanghai, and delivering a version of Touch of Evil “that went way beyond what censors would allow.” How dare he antagonize the censors like that!

Next was January 24th’s “Why Orson Welles failed as a Post columnist,” which doesn’t actually deliver on its promise, but does contain several failures of its own, most notably his uncritical, uncontextualized reporting that “the actor’s FBI file, disclosed several decades later, labeled him as a Communist by 1945.” That anyone should take seriously the FBI’s claim here is belied by Welles’s own statements on the matter (my favorite: “The scaly dinosaurs of reaction…will say in their newspapers that I’m a communist. Communists know otherwise: I’m an overpaid movie producer with pleasant reasons to rejoice, and I do, in the wholesome practicability of the profit system.”), as well as common sense. But I guess Lumeneck’s broader point is probably correct – how could a bumpkin like Welles even hope to brush the tips of his fingers against the towering standard set by the likes of, say, Andrea Peyser?

Lumeneck’s latest contribution really is a bridge too far, however, as it may possibly have a tangential effect on a current situation in the real world (something that is no doubt an unusual state of affairs for him). “Why is the crowdsourced campaign to finish Orson Welles’ final film a massive flop?” [sic] not only rather prematurely dances on the grave of the efforts to finish The Other Side of the Wind (it seems as though the story was filed, in Lumeneck’s own words, “in the 36 hours since [the campaign] was launched”, which means it was likely written considerably before that), but decides ahead of time that the film will probably hover at the “less than genius-level” of his other post-Touch of Evil work; presumably he’s referring to turkeys like F for Fake and The Trial.

While I certainly don’t think that Welles ought to be exempt from criticism or made to carry more significance than he can bear, I do believe that this is one area where boosterism is what is called for. And I will admit that Lumeneck makes an actually useful point in his otherwise very silly piece by calling attention to Frank Marshall’s association with the film. “…Marshall is hardly a struggling indie producer who needs to rattle a tin cup — he and/or any of his fabulously wealthy closest business associates could probably write the $2 million check out of petty cash. Marshall and his wife, Kathleen Kennedy, are co-founders, with Steven Spielberg (who owns the “Citizen Kane” sled), of hit factory Amblin Entertainment.” But Lumeneck for some reason takes this as evidence that the raw material itself is lacking.

A look at the latest numbers over at the Other Side’s Indiegogo site shows that they have been climbing – $107,207 in 3 days – so hopefully Lumeneck will have to find some other strange thing to get mad at Welles over in the next couple of months. Surely he will print a retraction if the campaign is successful – after all, the Post has a sterling journalistic reputation to protect.